A Shorten Labor Government would improve road safety and reduce traffic congestion by investing almost $250 million to progress the full duplication of the Barton Highway between Murrumbateman and the NSW/ACT border.

Today’s commitment means Federal Labor stands ready to invest $100 million more in this important project than would be delivered by a re-elected Morrison Government.

The Barton Highway links the southern and western areas of NSW to the ACT, running 52 kilometres between Canberra and the Hume Highway, near Yass. It is used by 12,500 vehicles a day, including about 1,000 trucks.

Increasing traffic volumes have led to increasing levels of traffic accidents on the highway, so a Shorten Labor Government would work with the New South Wales Government to expedite the duplication in the interests of road safety.

The project would also boost productivity by facilitating quicker movement of road freight around the region.

The chaotic Abbott-Turnbull-Morrison Government has cut road investment in regional Australia and attempted to conceal the cuts with promises of investment that it has pushed off into the never-never.

There is no better example of the unfair cuts inflicted by the Liberal and National Parties than the Barton Highway. 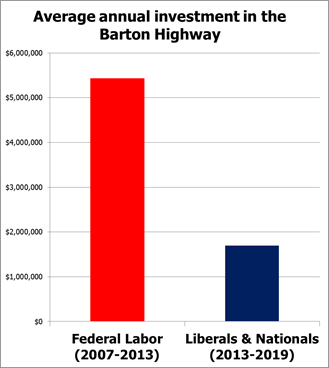 Only a Shorten Labor Government can be relied upon to invest in the road infrastructure regional Australia needs to not only boost productivity and drive economic development, but also to deliver safety driving conditions for motorists, truck drivers and other road users.