Total annual infrastructure investment in Australia has plunged by 17 per cent under the Coalition from the level it inherited from the former Labor Government, according to the latest Commonwealth figures.

The 2017 Australian Infrastructure Yearbook says that while Labor was in office, the public and private sectors invested an average of $57.7 billion a year on transport, energy, telecommunications and water infrastructure.

But under the Coalition’s stewardship, total investment has averaged $48 billion a year. 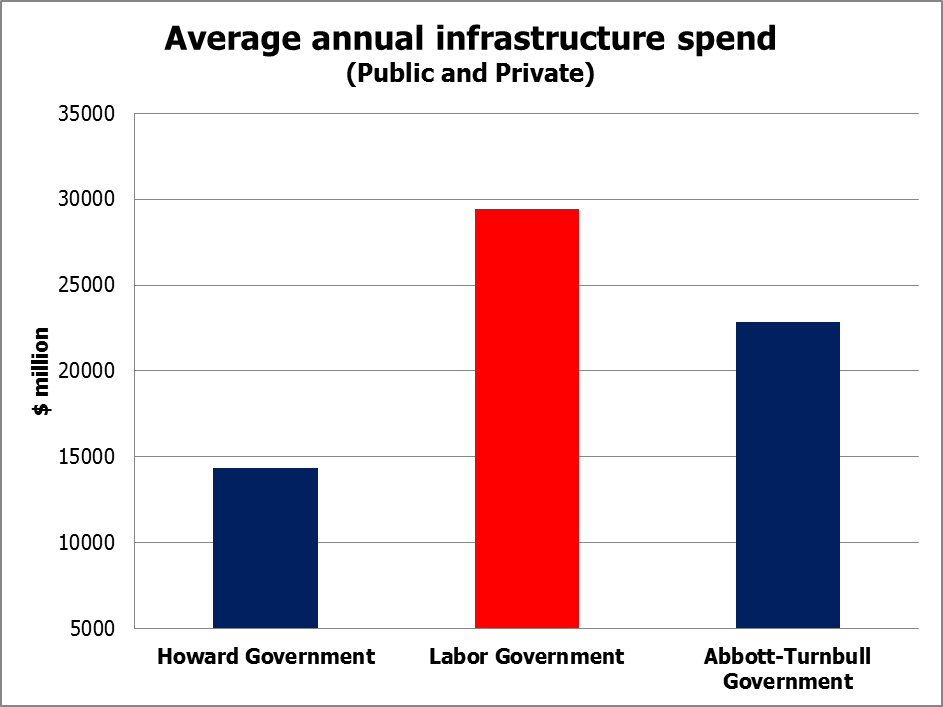 Produced by the Government’s Bureau of Infrastructure, Transport and Regional Economics (BITRE), the Yearbook also says average annual investment on critical transport infrastructure – rail, roads, bridges, and ports – is down by 22 per cent under the Coalition.

While the Commonwealth should be lifting its investment to make up for this private sector decline, the independent Parliamentary Budget Office has found that Commonwealth infrastructure investment as a percentage of GDP will halve from 0.4 per cent to 0.2 per cent over the coming decade.

Australian businesses, particularly in regional areas, need great railways and roads to make it easier to get products to market so they can thrive and create more jobs for Australians.

And our cities desperately require investment in public transport to address the traffic congestion that is eroding our quality of life and acting as a hand brake on growth.

While the Government has spent years trying to fool Australians into believing it has increased infrastructure investment, the evidence of its cuts is clear in its own figures.

The Government must increase infrastructure investment in May’s federal Budget, including by partnering with state governments to deliver important urban public transport projects like the Morley to Ellenbrook line in Perth, Melbourne Metro, the Western Sydney Rail and Brisbane’s Cross River Rail project.

Sensational performance by @sachahorler heading a

Hope you have a whale of a weekend! Thanks to Davi

Just got this pic from Celia, Taylor and Luke who

This is a long one – but it matters. Today I spo

You did it, Victorians. And you did it to keep all

Our recovery needs to give every worker every chan

If we keep making excuses for violence against wom

This is great news.

This is why we need a federal Labor Government.

Sat down for a (socially distanced) meeting with @

There are plenty of social housing units that need

Headed to #melbourne this morning, ran into a big

Finally got to see @james_powditch work at the #ar